Back to the Classics: The Moroccan Tagine

Back to the Classics: The Moroccan Tagine

Today I’d like to talk a little about hobbies & leisure.  A long-standing hobby of mine, well I guess more of a passion really, has been cooking.  I’ve always had a keen interest in cooking, and have always took great delight in learning recipes from all over the world and trying them out at home.  Today, I’d like to touch on Moroccan food, and in particular, the ‘Moroccan Tagine’.  If you found the other blog – beautifying the crockery - interesting I’m sure you’ll like this one.

I’ve been a keen home cook now for almost twenty years.  I guess it all started when I bought my first house and started to have friends over.  At the beginning I made a complete embarrassment out of myself.  I vaguely remember cooking up some vegetables in hot water and then adding raw beef mince to the pan to beef it all up a little.  It was only when one of my friends pointed out that I might want to actually cook the beef that I realized just how absolutely clueless I was.  At this time I was around twenty, and like many people, had never really had to cook for myself.

I can’t actually remember what I did after that or exactly how I got started but it wasn’t long before I was scouring the international section of the local supermarkets to pick out exotic ingredients I’d seen previously on one of the many cooking channels I used to watch.  This of course was back in the days where internet wasn’t so popular and at a time when having full access to thousands of step-by-step videos on YouTube was completely unheard of. So magazines and food channels on the TV were really my only resource.

It didn’t take me long to understand the different methods of cooking and the science behind each one, and also what ingredients generally went with another (or not) in a regional sense.  I was well on my way and cooking something completely new at least once a day.  I was fortunate enough to have a guinea pig close by too, as my mother used to call in every night on her way home from work for a quick cup of tea.  I would pester her to try my new creations, however much against her will, just to get feedback.  Bless her, in hindsight I probably shouldn’t have been so insistent but she was a good sport.  I think she put about 10 kilos on over a 3 or 4 month period, which caused a bit of a problem in the family at the time. 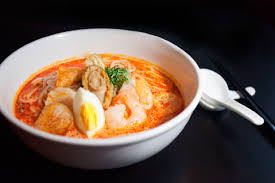 Any, I digress.  A year or so later I was specializing in Indian food, Thai food, Mexican food and all kinds of unusual exotic dishes.  One of my favourite recpes (which took a very long time to perfect I might add) was the Malysian or Singapore ‘Laksa’ – a fragrant coconut-based curry noodle soup.

Soon as I was getting really adventurous and exploring all sorts of fine dining resources to exploit, and while this satisfied the hunger of both knowledge and palate, I soon found myself feeling empty and unfulfilled.  I’d lost interest.  I’d gone way too far and had lost the point of real cooking: keeping recipes simple.

Years later, I was setting up the bain-marie in the hotel I worked at (I was working as a chef at this point) and after preparing four or five dishes for the evening guests I realized just how far I’d come, in terms of going back to basics.  See that’s where the magic is – at least that’s what I’ve learned – fresh ingredients, put together simply.  It’s a recipe for success if ever there was one. Keep it simple and keep it rustic.  Good ingredients speak for themselves.  They don’t need dressing up.

Anyway, to bring you to my main point, which is about cooking great food by keeping the recipe simple and rustic, and by using fresh ingredients, I’d like to introduce you to the wonder that is the Moroccan Tagine. 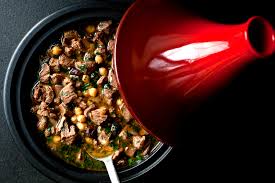 Originally from North Africa, the tagine is named after both the type of food served and the vessel in which the food is placed.  It’s primarily used in Middle-Eastern cooking, often containing wonderfully slow-cooked meat with a generous helping of herbs and dried fruits.  The tagine itself is made of glazed pottery and consists of a circular base unit that is flat with low sides and a large cone-shaped cover that sits on the base during cooking. The cover is designed to return condensation to the bottom, thus self-basting the meat inside.  I had one gifted to me a couple of years ago by an Australian friend who happened to be travelling in Yemen.  They were reasonably priced so she picked one up for me.  What a gift! And all I can tell you is forget your slow-cookers and your all-day pot roasts, this is the way to go.  The flavor from that glazed tagine is to die for.  They’re not too easy to get hold of, but in case you’re interested there is a website that offer lovely used ones for sale: http://www.used.forsale/tagine-le-creuset

To help you get started I’ve provided a link below detailing 5 Moroccan Recipes for you to try.

Thanks for reading guys, I’ll catch you next time..